The store will not work correctly in the case when cookies are disabled.
<< Back To All Categories
Search

Back to Buyers Guide >>

Details to look for during new and used machinery inspection:

Capacity, col. Dia. & arm length
Traverse of spindle
Hole in spindle
Drills to center of circle on base or table- inches
Min. & Max. distance spindle to base
Traverse of head on arm
Traverse of arm on column
Spindle speed range & travel
Power feed range
Height of base
Working surface of base

How to buy a Drilling Machine 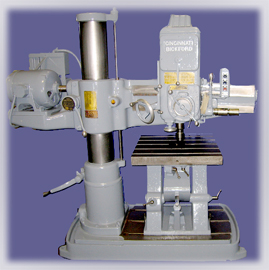 Drilling machines are generally characterized by means of rotating a cutting tool or advancing it along its own axis into a stationary workpiece to produce a hole near or equal to the size of the cutting tool. Advancing the tool along its own axis is the more critical of the two functions because of the feeding forces required. The rotating of the drill is the more simpler function. Although looked upon as the simplest of all the machining operations, drilling is done in variety of ways. Drilling machines are either mechanically or hydraulically driven, and are floor or table mounted. The axis of cutting tool rotation is vertical, horizontal or adjustable and hole location can be determined by positioning either the spindle or the workpiece. Additional operations are also performed on drilling machines: boring, counterboring, reaming, tapping, and spot-facing are all similar to drilling in the basic machine motions and usually require a drilled hole to begin with.

PRINCIPAL PARTS
The principal parts of a drilling machine are as follows:

UPRIGHT DRILLING MACHINE
Base - the support of the machine, and, in some cases the workpiece itself.
Column - the main vertical piece where other components of the machine are mounted on and aligned. Uprights may have a box-type or rounded column.
Gear case - mounted at the top of the column and houses the spindle gear.
Motor - for tapping operations and is of the reversing type. The power is transmitted from the gear case by the use of shaft, belts, or direct coupling and is located in the back of the column.
Shaft - the rotating member which draws the drill, moving either up or down through the gear case as the drill is fed or retracted. Head-holds the feed gearing, run by a feed rod from the gear case and mounts feed selection and direction controls. Automatic feeding cycles may be provided where the drill enters the work and leaves after reaching the proper depth without the operator’s attention.
Spindle - equipped with a taper nose to accept tapered shanks of drills, drill-mounting pieces, taps, and reamers.
Table - mounted on the column and can be raised and lowered or clamped into position to support the work for proper height of drilling.
Round - column machines can have the table swing about the column, giving flexibility in positioning the workpiece even though rigidity is sacrificed.

RADIAL DRILLING MACHINE
Base - foundation of the machine, supports workpiece during drilling operations.
Column - contained in outer shell, which is tubular, and is supported by rigid frame that is attached to base. Arm-used to support motor and head, able to move up and down on column and can be clamped at any height you wish. It can also be rotated about the column with the shell and clamped.
Head - contains feed and speed gearing and mounts the necessary controls for the different motions of the machine. It can be moved in or out on the arm and can be clamped to position the drilling spindle at different distances from the column. This motion, along with the raising and lowering of the arm, can be done at any point of the machine.

UPRIGHTS
Upright drilling machines are catagorized by a single vertical spindle that rotates in a fixed position and is supported by a modified C-frame construction. The various types include: simple belt drive, sensitive, geared-feed upright, heavy-duty, precision, and deep-hole drilling machines. The simple belt-drive machines are the most widely used. They are machines that do not have a geared or positive mechanical drive to the spindle. If speed changes are needed, then it is accomplished by the shifting of belts. These machines are either floor or bench mounted.

GEARED FEED DRILL PRESS
Geared-feed upright drilling machines offer a wide range of application. Usually, they’re used for medium-sized work or even heavier work where it’s placed on the base in some models. The sensitive uprights are similar in design to the geared-feeds but require the work to be hand fed since their construction and work load is lighter. Heavy-duty production drilling machines are much heavier in construction and can handle heavier work. Most of the models are constructed with hydraulic feed, and in the case of the inverted drilling machine, it drills from the bottom up. Precision drilling machines have their spindles in a fixed postion, this is why they’re catagorized as uprights. These machines were made for use with spacing or positioning tables, and also feature a deep throat or reach. Positioning is accomplished by either mechanical or hydraulic methods and is adaptable to numerical control. Deephole drilling machines were made for, just that, deep hole drilling. A drill gets binded when the depth of a hole is four or five times its diameter, chips accumulate which interferes with its cutting. These machines are able to withdraw the drill and clear the chips by injecting pressurized cutting oil several hundred pounds per square inch. The tool is usually held stationary, although some models have the drill rotating.

HORIZONTALS
These machines were made because sometimes it is almost impossible to position workpieces for vertical drilling. The various types include: table-type, way-type, and self-contained drilling machines. Table-types have a rotary table, it allows four sides of a workpiece to be programmable. Way-types are usually single-purpose machines designed around flat or bar-type ways. Self-contained drill units use all types of feeding mechanisms, cam, screw, hydraulic, electronic and air pressure.

MULTIPLE SPINDLE
Multiple-spindle drilling machines offer a wide variety of spindles from standards to single-purpose production machines. Standard gang drillers consist of two or more standard columns, heads, and spindles that are mounted on a common base. Universal joint drillers allow each spindle to be adjustable within a certain area. In-line drillers have one central drive which drives a number of spindles in a line next to each other. Finally, fixed-spindle production drillers contain a number of spindles arranged in a fixed pattern, getting their power from a series of gears that are driven by a single driver.

SELECTION
Drilling machines are widely recommended for various jobs because they are simple to operate, easy to set up, and the cost of operation is relatively low. When selecting a driller instead of an alternative machine tool, the user must determine the production requirements best suited for their needs. The user must also decide on the drill type, size, capacity, and power. For example, for a 24 inch upright driller, the spindle size would be slightly larger than 12 inches. The numbers refer to the size of the taper in the spindle and are related to the capacity and power of the machine. The higher the number, the larger the work diameter and horsepower. In standard radials, length of the arm and column diameter are referenced. Universal and horizontal radials are sized by their spindle diameter, usually from 2 to 5 inches. Horizontal way-type and spindle feed units are referenced by horsepower and length of feeding stroke. Turret drillers are referenced by model number and the use of numbers for designating drill capacity, usually by 1, 2, and 3 in uprights. Multiple spindle driller referencing is by model number and size of drilling area. Other production requirements such as maximum feed rate, spindle travel, and maximum height under the spindle should be determined in the selection process.

NON-POWER
Carefully examine the physical condition of the machine, see how it sits.
Inspect the mainline castings carefully by sight and hand, looking for cracks, breaks, and welds.
Closely examine the spindle, check if it has been used properly and is not damaged or scored.
Look in the gear box and spindle gears. Check if they’ve been pitted or cracked.

UNDER POWER
Check for spindle concentricity with the use of a test bar and dial indicator. A spindle with worn bearings means the life of the spindle is near. Spindle run-out should not exceed .0002 inches.
Look for backlash in the spindle feed, this puts strain on the drill when it goes through the workpiece.
Carefully listen to the gear boxes, listen for sounds of grinding or grating.
Put the machine through a complete cycle, carefully checking all electronic controls so that they are working

Find Machinery Across the United States .